The first American actress to play Peter Pan was Maude Adams. There’s quite a bit of controversy about this woman, who was the model for the actress in Somewhere in Time. Cuban playwright and poet Mercedes de Acosta was said to be her lover. Others dispute this:

The same speculation and rumors about Maude Adams’ sexuality that existed during her lifetime persist over fifty years after her death. On the one hand, she never married and had no known romantic relationships with men. On the other hand, she had no known romantic relationships with women, either. Her relationships with fellow Charles Frohman players Marie Doro and Billie Burke do not appear to have been anything more than professional camaraderie, and the audiences she granted to Mercedes de Acosta were nothing more than the grudging indulgence of a gushing, and pesky, fan. Though a renowned international star of the stage, she led a very private life offstage, eschewing the public spotlight and maintaining an aura of aloofness. Unlike other divas of the theater, she had no interest in appearing in the then new medium of film, though she did invent a system of lighting that greatly enhanced that art. There were rumors of a male suitor that had either abandoned her or died tragically, ruining her for any future relationships with men, a legend which provided the inspiration for the 1979 film, Somewhere in Time, in which acclaimed early 1900s stage actress Elise McKenna (played by Jane Seymour), abandons her controlling producer to love time-traveller Christopher Reeve, only to lose him when he returns to his native time, after which she becomes a spinster recluse. Adams herself always insisted she was married to her work and had no time for or interest in romantic entanglements of any kind. But then there was the mystery of why she had all her personal correspondence burned just before she died…

Whether Adams was a lesbian or not, she set a precedent for the playing of Peter Pan on the American stage which was followed in time by Mary Martin’s performance on Broadway in the 1950s. This Peter Pan — and the one who appeared in the Walt Disney animated feature — possessed strong androgynous overtones. For some, this equated to homosexuality. (I have heard “Peter Pan” used to intimate femininity in a man on more than a few occasions.) This could be largely due to Barrie’s decision to use actresses in the early stage productions of the title role.

If Adams was — as many admirers report — asexual, then this androgyny becomes explicable. As a boy who never grows up, Peter Pan never has a hard-on, never knows orgasm. He sees Wendy as his mother (her traditional role) rather than as a lover (which is the tack taken in the Hogan movie.) The choice of Adams and other women to play the lead suggests to me something both about how we see boys and about how we see women: 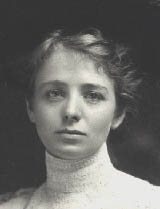 as creatures who aren’t supposed to enjoy lovemaking. Adams herself declared a new sex that was neither male nor female, but dedicated entirely to the theater.

Many deny asexuality. They conclude that those who choose a celibate and chaste lifestyle — ranging from Adams to monks, nuns, aged bachelors, and spinsters — must be doing something behind closed doors. Sometimes they are. But I truly believe that there are those, such as Adams, who never develop any romantic interests but dedicate themselves to a craft. (Emily Dickinson is a strong candidate in my book for asexuality.)

Because the asexual are different from the heterosexual majority, they are often claimed to be gay or lesbian. Because Adams did not marry and because she attracted female as well as male fans, many post her on lists. It may be true that she chose to hide her gayness from a society which just would not understand.

On the other hand, it may be nothing more than a projection of sexual hunger. The sexual — both hetero and homo — just can’t believe that there may exist people who don’t have the drives. Heterosexuals dismiss such individuals as probable gays or lesbians: and the gays and lesbians, eager to plump up their own lists of “famous people who were like us” readily claim many for whom clear evidence does not exist. I believe that Maude Adams could well be one of those people. Her asexuality makes her suspect and her talents make her a great prize to be claimed by an unfairly disparaged minority whose population , nonetheless, is nonetheless larger and more outspoken than that of Adams’s true peers.