Drunk on the Disease

A few months ago, Elkit put me on to the film Grizzly Man

, the tale of Grizzly People founder Timothy Treadwell who got himself eaten by the bears he styled himself as “protecting”.

At the time Elkit shared her views on the film, I wrote as a comment:

From what I have gathered, the fellow went into the wilds to get away from his alcoholism and entered the world of mania. He styled himself as the “savior” or “protector” of the bears, but he did nothing except chase them around.

I am no psychiatrist, but the man sounds bipolar. Yes, he sentimentalized but the sentimentalization was downright clinical and, in the end, cost him and his girlfriend their lives.

Danger to self and others. What a little lithium might have done for him.

I hadn’t seen the film then. Now I have. And it vindicates my opinion: Treadwell suffered from bipolar disorder. At one point, his “widow” reveals that he sought the help of a psychiatrist and was placed on mood stabilizers. He didn’t like the side effects, however: he craved the highs and the lows.

Treadwell entered the wilds to curb his drinking and drug abuse. It did do that for him. Why wouldn’t it? He spent months and months away from civilization. There were no liquor stores or pushers in the wilderness. Getting off the juice was easy.

Instead, he took a spoon and a match. Then he placed a liberal dose of teddy bear “wilderness” in the bowl of the spoon, heated it up, and injected it into his brain. Treadwell saw himself as protector of the bears, but a native American spokesman who Herzog interviewed says that his act showed disrespect for the animal. He invaded their territory which the Aleut would never do. The film shows him treating the bears like pet dogs, attempting to rub them and scratch them on the nose. The bears didn’t quite like this.

At another point, he gives a bear fighting advice, as if he had just witnessed a WWWF match. His arrogance asserts itself most strongly when he castigates the National Park Service for having a 100 yard rule concerning the grizzlies and for requiring that he move his campsite once a week so as to minimize environmental damage.

The behavior of this self-proclaimed “environmentalist was grandiose and reckless. Yet in addition to the critical voices, there are others who didn’t get that he was sick. “Oh that was Timothy,” they say. Never mind that he tried to pass himself off as an Australian, so badly that one friend said that his accent sounded more like a bad JFK. Never mind that he dragged a teddy bear along on his wilderness trips. Never mind that he endangered his life and the lives of others. Never mind that he forged an image of himself as a rugged individualist alone in the wilderness while bringing along unacknowledged girlfrends who held the camera for him and carefully stayed out of the shots. 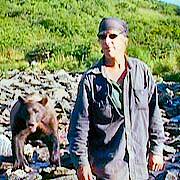 When he died, his death brought wails from his supporters and cruel jibes from extremists on the anti-environmentalist end. I think Timothy never got out of the teddy bear stage. He never got that grizzlies were the most dangerous animals on the planet and that he was not immune to their bites and their claws.

For him, they were no more dangerous than plastic action figures.

Towards the end of the film, the coroner who sorted through the remains of Treadwell and his girlfriend describes what happened in the last six minutes. Amy beating the bear over the head with a frying pan, over and over. Timothy crying for her to get out as he suddenly realizes that what he said in one of his earlier videos was dead on: They can kill you. They can decapitate you.” And that is what happened.

Friends say that they think that Timothy died the way he wanted to die. Yet on his own camera, he says that he never wants to be hurt by a bear. I think that in that last moment, it may have dawned on him how foolhardy his self-proclaimed apostlehood of the Bear was.

In that last terrible moment, Timothy realized the price one pays for mistaking his mood swings for the Voice of The Grizzly Lord. He died for those animals. He became their meat.