Insert a Trite Metaphor for a Corral #82

This Could Be Someone You Didn’t Know

Posted on December 30, 2007 in Compassion Responsibility 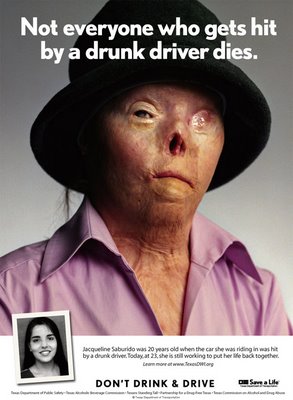 Designate drivers. Or stay at home.

Steal this graphic if you wish. Right-click to save.

Thanks to Gay Bipolar Guy.

Insert a Trite Metaphor for a Corral #81

Insert a Trite Metaphor for a Corral #80

San Francisco Zoo authorities and police are still trying to piece together what happened at the Siberian tiger enclosure. A new report reveals that they found “a shoe print on the railing of a low fence that separates the grotto from the visitor walkway and that police are trying to determine if the print matches any of the shoes of the three victims.”

I am betting that it does. Teasing is a common problem at the San Francisco Zoo. I’ve seen it myself on more than a few occasions. A few years ago, the big attraction for oafs was the chimpanzee exhibit where you could antagonize an ape into throwing his feces. If the trio of young men was egging Tatiana on, what followed cannot be called heroism — just trying to recover from a fatal mistake:

All three victims were at the grotto when the attack began, she said. When Sousa was attacked, the other two, who are brothers, yelled to distract the tiger. Tatiana released Sousa and turned toward the brothers, injuring one with claw slashes and bites.

The brothers fled to the cafe, but the tiger followed and mauled the second brother there.

Responding to the emergency call, police found Sousa dead near the grotto. After being alerted by zoo staff that the animal was heading toward the cafe, they pursued and found the tiger mauling one of the brothers.

“They saw a victim seated there on the ground. They saw blood coming from his face,” Fong said. “They heard him saying, ‘Help me, help me.’ ”

The tiger ignored the police officers’ shouts. When a second squad car arrived, Tatiana turned on the officers.

“To protect the victim as well as everyone else, they fired,” killing the animal, Fong said.

And they did the right thing.

In addition to the new fences and barriers (the San Diego Zoo has 12-foot walls on two sides and a 16-foot wall on the third — equipped with a 4-foot curved barrier at the top that extends inside the enclosure. All the enclosure walls are electrified at the top.), the San Francisco Zoo needs to look beyond technology and have people patrolling the park. Again, I have seen young men taking a dare to get inside the tiger fence, hurling objects and calling out to the beasts. Every time I have hurried by praying that this would not be the day the tiger would lash back. Christmas 2007 was that day.

One might wonder at Sousa’s standing up to the tiger. But it was only a few years ago when a group of bikers successfully faced down an anthropophagic mountain lion. I believe Sousa thought he and his pal could do the same, not factoring in or realizing the tiger’s greater size. When I see a mountain lion in the wilderness, I stand my ground. They only weigh about 120 pounds. If I were to see a tiger, I might quickly accept Pascal’s wager and say my prayers.

Insert a Trite Metaphor for a Corral #79

Putting Pigeons on the Pill in the Park — Would [[Tom Lehrer]] be willing to write a song about this?

UPDATED: Bhutto’s coterie doubts the hitting her head on the sunroof opening version of events.

Personally I don’t see this as so implausible. The Guardian photos show Bhutto’s head clearly above the sunroof opening as the shooting begins. Then comes the explosion. I think that Bhutto could have been in the process of retreating into the car when the shockwave hit and mashed her skull against the sunroof opening as officials said. How she died in this incident is not that great a point: the fact is she is dead and Musharraf is to pay for not providing her with security, one or more of Bhutto’s enemies (maybe the Taliban/Al Qaeda) for the mechanics of the assassination.

The Pakistani government has been very quick to blame this on Al Qaeda and the Taliban. Looking back over Bhutto’s life, forces within the country have damned her for corruption and yet done nothing about the corruption at the heart of the army, which has repeatedly stepped in for the sake of “order”. One wonders if an old-style Islam resides in their heart so that they just can’t take a female leader.

In choosing these links, I have gone outside the United States, choosing ones from the region and from Great Britain which has a historical relationship with Pakistan. That the story about the email has only appeared in The Times of India is an indication to me that the Western press wants to exonerate Musharraf and do it’s knee-jerk-quick-step dance of blaming the Taliban. Maybe the Taliban did orchestrate this, but Musharraf gave them a hand by ignoring previous attacks on her and not supplying her with additional guards. This claim of assasination by neglect needs to be checked.

Towards what darkness does Pakistan go? Civil war or stronger military dictatorship?

Insert a Trite Metaphor for a Corral #78

Benazir Bhutto was proof that a Muslim woman could be elected to govern an overwhelmingly Islamic country. She was in exile until last October when the regime of Pervez Musharraf allowed her to return home to participate in free elections. Her death today signals the possible start of civil war in a country that has the Bomb.

One of the world’s heroes has been martyred.

So many of my friends are in perilous places. I wrote this to one who is currently seeking a church that will fill her emptiness, give her a jolt of divine splendor. Maybe others need to read these words, too:

I fought God for many years, toying with the idea of a divorce, a renunciation of divine being. In the end, it was when I was in partial hospitalization and listened to the testimonies of patients who had been in the pit three or more times, yet still insisting that prayer and daily devotion helped them through, that I made the decision — as my therapist puts it — to let God off the hook. I chose to live as an agnostic (atheism seems so mean) and make my first order of the day being a good person.

I think understanding for yourself what God is helps. I realized that if there is any God that makes sense to me, it is the God of the Book of Job. Not the nasty bugger who makes a bet that unravels Job’s life, but the God of the last chapters who speaks to Job out of the chaos of the whirlwind. This is the God who is the Universe, who is forever busy moving stars around, causing asteroids to fall on planets as meteors, blowing up winds like the one that robbed me of one of my deck chairs on Christmas Day. And this God, I realized, doesn’t have it in for you, doesn’t put burdens on you for the sake of testing you. Things just happen and sometimes they happen to good people like us. There’s no malice in it. Just the spinning of the Universe.

We can get to desiring vision like we desire a fix or a drink. We can be addicts to ecstatic experience. I’ve found my best happiness in just being like a monk — going about my affairs, keeping each moment clear. You don’t have to live in a monastery to be like this.

If there is any part of traditional prayer that makes complete sense to me it is the four words from the Lord’s Prayer “thy will be done”. Things will happen. They won’t blow you away like a storm, cause you to shudder from head to toe with the blue electricity of communion with the divine. They will, however, refocus you on what before all else is important: be a good person and don’t waste energy or spirit trying to move the world in your direction.

Insert A Trite Metaphor for a Corral #77

For tiger updates, please see the next article.