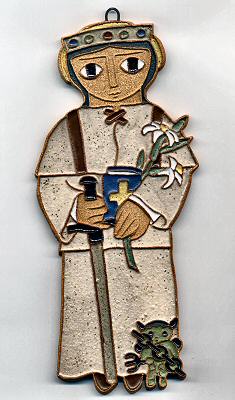 St. Andrew’s Abbey in Valyermo specializes in doe-eyed ceramics of angels and saints. A large awning downhill from God’s Court and the stage where the sacred dancers pirouetted Bible stories and psalms. Stacked on tables were the flat wall hangings that one of the fathers made to help support the contemplative life of his peers. We found St. Diphna next to Dorothy Day, a good augury Lynn and I thought.

There were only two figures left. I lifted one carefully. The helper (who was more of a watcher) shrugged her shoulders as I lightly gushed my praise of the votive figure. Either she had no idea who St. Diphna was or she distrusted anyone who would seek her aid. It didn’t matter to me. I paid her the price and took the figure to the line where the artist himself signed the holy objects. I thanked him for making this figure available. He grunted, so I made way to the wrapping area.

The wrappers received tips, so they competed for our attention. One had a sign which read “The Best Wrapper Is Here”. From among the bored teenagers, I chose a Latina to wrap the relic because she seemed more adept at the task than the males who slouched in their chairs and picked at their shirts just over their navels.

“Who is this?” she asked as I handed her St. Diphna.

“She helps about two percent of the American population,” I said.

“Which two percent?” she asked. She just had to know the full story.

I smiled and pointed to the chained little green devil in the lower right hand corner of the clay icon. “Isn’t that great? I like him.” I smiled as she followed my fingertip. “St. Diphna helps the two percent of all Americans who have little green devils chattering in their ears.”

Her mouth had already been open, so I can’t say that it fell. She looked at me and then at Lynn. Which one was it? her eyes asked. Who had the little devils chattering in her or his ear? She never found out from us. I accepted the wrapped saint and left her a dollar.

No one seems to know anything about St. Diphna (or Dymphna) other than the fact that she came from Ireland, was a princess, and that her tomb was the scene of miraculous “cures” of sufferers of mental illness and epilepsy. One account has it that she was the victim of paternal rape. Her father tracked her and the three hermits who rescued her to an oratory at Gheel, the Netherlands. The Celtic chieftain slew her three companions on the spot but offered Diphna the chance to return with him to enjoy the pleasures of the court. The virgin refused and he performed the crude operation of disjointing the vertebrae in her neck so he could keep her head as a souvenir.

Seven hundred years separated her death from the inaugaration of her cult. Who found her tomb and that of her confessor, St. Gerebernus, is not recorded. Epileptics, the insane, and the demon-possessed came to her interment to be rid of their sufferings; hagiographers report their supplications blessed. Was it because St. Diphna undoubtably suffered from post-traumatic stress disorder as a result of her father’s incestuous attentions that she became associated with those of us who suffer from mood disorders and similar organic dysfunctions of the brain? The medieval mind may not have been so close after all.

Some notes on the icon: The crown on St. Diphna’s head indicates that she was a princess, Celtic according to tradition. The blue book represents her commitment to a life as a female anchorite. The lilies indicate that she was a female martyr and the sword is the instrument of her martyrdom. The chained little green devil, of course, represents insanity, which in medieval times was thought to be the product of demonic possession.

A list of other patrons of the mentally ill.