You’ve heard this on the news a lot every time there is a mass shooting perpetrated by a person who is mentally ill. Given that people died in the incident and that the person who committed them was sick, the promulgator of this argument wants us to draw the conclusion that the mentally ill are dangerous despite the fact that study after study show that the mentally ill are more likely to be victims of violence than perpetrators. Furthermore, it ignores other, more substantial causes of mass shootings that have nothing to do with mental illness. But because there is blood shed, the association of the incidents with mental illness is strong and a powerful if illogical premise for severe solutions.

There is a name for this type of logical fallacy and it is called “misleading vividness”. Because few of the shootings involve people who are mentally ill, Jaffe goes for tabloid reasoning (note how he loves The NY Daily News). It happened! It is going to happen again! Therefore forcing treatment and locking up the mentally ill is the answer!

The Nizkor Project explains the mechanism of this argument like this:

This sort of “reasoning” is fallacious because the mere fact that an event is particularly vivid or dramatic does not make the event more likely to occur, especially in the face of significant statistical evidence.

People often accept this sort of “reasoning” because particularly vivid or dramatic cases tend to make a very strong impression on the human mind. For example, if a person survives a particularly awful plane crash, he might be inclined to believe that air travel is more dangerous than other forms of travel. After all, explosions and people dying around him will have a more significant impact on his mind than will the rather dull statistics that a person is more likely to be struck by lightning than killed in a plane crash.

It should be kept in mind that taking into account the possibility of something dramatic or vivid occurring is not always fallacious. For example, a person might decide to never go sky diving because the effects of an accident can be very, very dramatic. If he knows that, statistically, the chances of the accident are happening are very low but he considers even a small risk to be unacceptable, then he would not be making an error in reasoning.

A recent studys show that what is statistically significant about mass shootings is that the people who commit them own a lot of guns. A commentator observed:

….yes, we are protected from those with diagnosed mental illness. However, if an angry person with impulse control issues has a clean record and clear medical history, they pose more of a danger to society.

Here’s a secret: I’m diagnosed bipolar. I take four medications to function normally. I can say that out of all the feelings I’ve had, all the mood swings, all the depression, I’ve never wanted or needed a gun.

If this is a mental illness, it has little to do with the people that DJ Jaffe wants to control, those of us living with bipolar disorder, schizophrenia, and depression. These people live with something closer to a personality disorder. Jaffe’s proposals do not do anything about these (nor does he call for gun regulation because he has surrendered his liberal credentials by aligning himself with the NRA.) Personality disorders cannot be medicated. Nor do the sufferers tend to seek help because they don’t think anything is wrong with them. Jaffe is on the record for saying that we should stop talking about stigma — mostly because it is his main vehicle for pushing reform. The use of the misleading fallacy is emblematic of his approach and is a powerful reason for doubting his prescriptions. 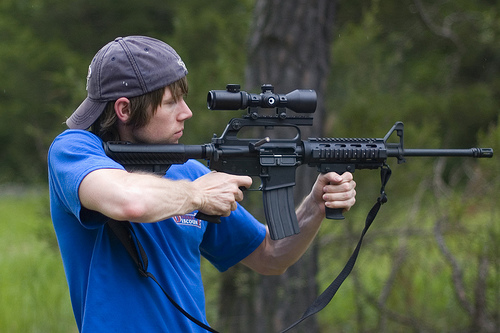